The hobo nickel is a sculptural art form involving the creative modification of small-denomination coins, essentially resulting in miniature bas reliefs. The US nickel coin was favored because of its size, thickness and relative softness. However, the term hobo nickel is generic, as carvings have been made from many different denominations. 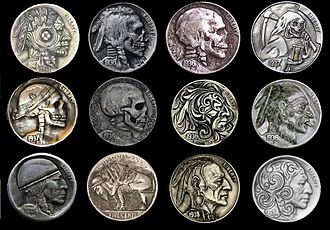 When the Indian Head, or Buffalo nickel, was introduced in 1913, it became popular among coin engravers. The big Native American head was a radical departure from previous designs and would not be seen on any subsequent coins. The large, thick profile gave the artists a larger template to work on and allowed for finer detail.

On earlier coins, the head was much smaller in relation to the size of the coin. For example, on a Lincoln cent, the head covers about one-sixth of the area. On the Buffalo nickel, the Native American's head occupies about five-sixths of the area. Moreover, the nickel is a larger coin. Large heads also adorn the Morgan dollar and the Columbian half dollar commemoratives of 1892-93, but these coins were rarely altered due to their high value.

Many talented coin engravers, as well as newcomers, started creating hobo nickels in 1913, when the Buffalo nickel entered circulation. This accounts for the quality and variety of engraving styles found on carved 1913 nickels. More classic old hobo nickels were made from 1913-dated nickels than any other pre-1930s date.

Many artists made hobo nickels in the 1910s and 1920s, with new artists joining in as the years went by. The 1930s saw many talented artists adopting the medium. Bertram Wiegand, known almost exclusively as Bert, began carving nickels in the teens, and his student George Washington Hughes, known as Bo, began carving in the late teens (and up to 1980). During this period, Buffalo nickels were the most common nickels in circulation.

By the end of the 1970s, most Buffalo nickels had disappeared from circulation, and the majority of engravings were performed on worn coins.